How We Hear – The Human Ear

The Human Ear is Divided Into Three Main Sections: 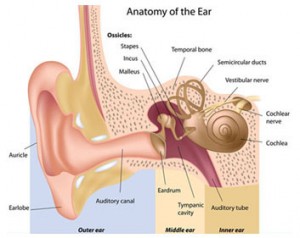 The outer ear also contains cerumen, otherwise known as ear wax. Cerumen contains properties that can prevent infections, maintain sterile conditions in the ear canal, and deter foreign bodies or insects from entering deep into the ear. Excess ear wax should be removed to maintain optimum hearing aid performance. The removal of ear wax is recommended to occur under the supervision of a physician.

The middle ear includes the smallest bones in the human body known as the ossicles.

The Ossicles Are Named Individually:

When sound is directed to the eardrum, the eardrum vibrates and causes the ossicles attached to move simultaneously.

The middle ear is responsible for converting acoustic energy (sound waves from the outer ear) into mechanical energy (movement of the ossicles).

The inner ear mainly contains the cochlea, vestibular system and hearing nerve. The inner ear is located in the temporal bone.

The inner ear is responsible for converting mechanical energy from the middle ear into electrical nerve impulses that are transmitted to the auditory complex in the brain. The end result is you hearing a sound.

Arrange An Appointment
© 2023. Omni Hearing. - All Rights Reserved.
Back To Top
×